Get to know the science and software behind creating digital art with six unique digital art workshops in Nottingham, led by artists, designers and toolmakers. These events accompany Sensing Systems, Matt Woodham’s debut solo exhibition which takes place at Bonington Gallery until end of March 2020.

Some highlights from Friday of Frequency 2019! 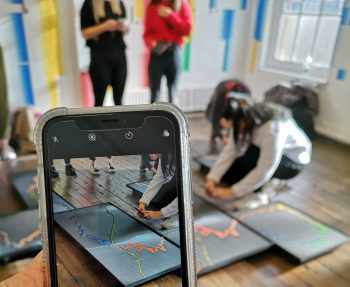 Artist George Eksts’ exhibition titled Serious String at Mansions of the Future has been re-curated by visitors at Frequency Festival over the past four days. The works exhibited in a special framework, and on wheels, allowed visitors, gallery staff and the artist to put the works together and to re-curate the show.

THE MEET UP: #1 Women in Tech  Speakers Announced

On Wednesday 23 October 2019, Frequency International Festival of Digital Culture will convene its first inaugural event bringing together the collective voices, from across the creative industries and education sector alongside key influencers and policy makers, to champion Women in Tech and help shape the future of digital for all.

In August 2019 Sophie undertook a residency with Mansions of the Future, resulting in a digital commission to coincide with Frequency Festival.

This new online commission combines simulations of alternate realities with research into Donna Harraway’s writing on how the human and non-human are inextricably interlinked. 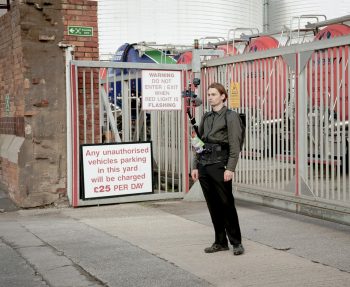 A series of public performances held in Liverpool and Salford (© Photo credits Amina Bihi) as well as a collection of eight video/text/audio essays available on his website.

YouKnow is a research project that was initiated by a residency at FACT Liverpool and the BBC in Salford and London.
By looking at BBC journalists’ workflows, BBC R&D experiments, and real world events, this research aims to evaluate the impact of automation and Artificial Intelligence in the construction and consumption of news items. This research has materialised itself through several outputs:

ABOUT THE ARTIST
Thomas Grogan is Franco-British artist and design researcher based in London. With a background in Industrial and Speculative Design, he has developed a practice that is driven by ethnographic research, investigating current and future social issues surrounding emerging technologies. His work varies from installation, filmmaking, to performance.

We are very excited to announce that our fifth edition of Frequency Festival will be hosted in Lincoln from 24–27 October 2019.

WHO ARE INTAR-MEDIA?
Lincoln based company IntAR-Media is a digital consultancy which helps businesses get involved in the digital future by creating interactive technology solutions including apps and software.
IntAR-Media was started by University of Lincoln graduate Stephen Fisher who, after being involved in smaller projects and working part time as a game journalist, decided to start out on his own with a company that shared his values. Fisher believes that technology should be used as a tool for learning and creative expression and that budget means nothing without passion and the aim to change the world for the better.
Stephen produces work ranging from Augmented reality, photography and character design.

WHAT ARE INTAR-MEDIA BRINGING TO FREQUENCY 15?
Fisher and IntAR-Media worked closely with Frequency to develop a fun and engaging app for the festival – the first of its kind – that aims to enhance the experience of the festival-goers by giving users an interactive guide to the schedule as well as extra information and mini games to accompany their journey along the festival trail.

We got the chance to ask Stephen a few questions:
What will the Frequency Festival App bring to Lincoln this October?
The Frequency application is for me not just a tool for providing information rather a method of engaging audiences via technology and encouraging exploration and education. Games are often seen as a form of escapism where anything is possible and no penalties lie and it is this, which has driven forward my interest into game design and interactive media as a whole. As a whole I believe people can achieve great things however we are often scared to do so, events like Frequency festival brings communities and expression together giving light and happiness.
What are you looking forward to about this years festival?
I am personally looking forward to meeting and seeing the talented work of my peers and delve into new worlds and passion that so many artists have clearly put into this years Frequency.
What does liberation mean to you?
Liberation for me is not just about the freedom of expression we as creative’s have but the responsibilities we have to inspire and help others reach their dreams.

WHO ARE COMPAGNIA T.P.O?
Compagnia TPO is based in Prato, Italy, with a variety of talents within their team they utilise theatre, dance and visual arts to interact with the audience. They mix art and play as interactive technologies allow the audience to immerse themselves in the show and use their bodies and movement to explore the space around them. This audience involvement creates unique interactive shows for children as well as installations for galleries and museums to introduce a younger audience to a world of contemporary arts.
WHAT ARE THEY BRINGING TO FREQUENCY 15?
Travelling over from Italy, TPO the interactive theatre group are bringing you and your children a fantastic multimedia show, immersive and interactive, mixing dance, music, projections and sculpture let your imagination run wild with this show. BLEU! dives into the world of sea creatures and ancient ruins, take a journey of discovery, explore the place and interact with the show through movement of the body.

“Visual, emotional and immersive theatre. Space is the protagonist in TPO’s shows with its images, colours and sounds. Thanks to the use of interactive technologies every show is transformed into a ‘sensitive’ environment where the thin border between art and play can be experienced.” – Insite Arts
Some of their past shows include Saltbush and Babayaga.
Catch the performances on Saturday 24th October and dive into a world of fish and sea creatures during Frequency 2015.
Book your tickets now at: https://www.lincolndrillhall.com/events/compagnia-tpo-bleu
Visit: http://www.tpo.it/
Tweet: @CompagniaTPO

Not goodbye, but au revoir.

40 Artists, 17 venues, 9 days
This news post marks the end of Frequency 2013. We have welcomed thousands of people through our doors, immersing them in digital culture to inspire, challenge and encourage creative debate.
2013 saw the UK/European premiere of LA group WIFE, and 11 other World Premiere events, brought into the heart of Lincoln. With work from Lincolnshire-based, national and overseas artists alike, Frequency 2013 has brought innovative, diverse work to Lincoln. From screenless animation, to video goggles, to projection mapping, we’ve explored the possibilities and the changing relationships between digital and art.
Our Storify articles have captured comments, photos and videos to see the Festival through your eyes. Take a look to see the journey of the Festival and for a breakdown of the highlights. We also received some fantastic write ups from New Scientist, Design Week, Run Riot and Wild Culture.
“there’s a pretty good chance that Lincoln, the steeply cobbled East Midlands treasure that motorways forgot, might just become the destination for digital culture in the UK”
– Wild Culture
The synergy between historic sites and new technologies has been at the heart of Frequency. To all of those who saw, for example, Trope’s Conversio at Posterngate or Alexis Rago’s Impermanent and Everlasting at Chad Varah House, you could experience first hand how the city of Lincoln was integral to the work, and we look forward to exploring these interconnections further in 2015.
Although the Festival has ended, Frequency is still about… We are delighted that The Collection will be running Where are we now? until 12th January, and the National Centre for Craft and Design will be running Alexis Rago’s Chaos Contained until the 17th November and Revolution in the Bedroom, War in the Playground until the 5th January.
We would like to take this opportunity to thank our partners, supporters, artists and all of our wonderful volunteers, all of whom helped make Frequency 2013 happen.
As 2013 ends we are already looking forward to Frequency 2015,  when we will join in with the celebrations of the 800th anniversary of the Magna Carta, exploring ideas around Liberation during the October Half Term.
We’ll see you then.
– Threshold Studios & the Frequency Partners